Remember, when you kill the joe, you make some mo'. See other episodes here.
Posted by Roy at 11:49 PM No comments:
Labels: chuckle

Music takes up a huge chunk in my life. Good music is a lot like what they say about love -- it isn't really music until you give it away. Or in this case, share it with the public. Despite the really bad analogy, I figure that I might as well broadcast my musical tastes on this dang thing, which by doing so, might strike a chord (no pun intended) in someone to cause them to say, "Hey, that's pretty good." Or at the very least, provide a home for these songs in someone's ipod. But hey, good music should be revealed to and appreciated by as many people as possible, right?

Couple disclaimers before I start: my musical tastes are pretty limited and specific, so whatever I put up here in the coming weeks might never appeal to the majority of you. In which case, you can save yourselves a couple precious megs of hard drive space and skip downloading the song. Secondly, I rarely listen to FM radio (im a CD-junkie), so in the event that I post up a song that has been up on the Billboard 100 for the past three months, stick it to the man.

Who's Jinny? I dunno. I randomly found her stuff from someone's xanga the other day, but boy, am I ever glad that I did. She's an up-and-coming indie artist who's recorded her album with Koo Chung's (pretty well known singer-songwriter-producer on the east coast) label. And she's got a voice. As per her bio, you really can hear hints of Sarah McLachlan and Fiona Apple in her. But I use the McLachlan comparison sparingly.. there's only one other person in the world who I would compare McLachlan to. Anyways, this will be pretty much be the extent to my reviews, at least for now.

Alluding to Hamlet's Ophelia, who was apparently a woman troubled by her deep capacity to feel and love, "Ophelia" is about a disillusioned girl who found life not to be what she expected.
Posted by Roy at 11:37 PM No comments:
Labels: listen

Life is complicated, given its fair share of problems and pitfalls. Every once in a while, it's healthy to pause, take a look around, and be utterly thankful for what you have. Doing so doesn't necessarily make life simpler, but it does put things into a simpler perspective. Then the next breath becomes easier to take.

So, today has the potential to be something better than I originally thought.
Posted by Roy at 12:35 PM No comments:
Labels: wonder 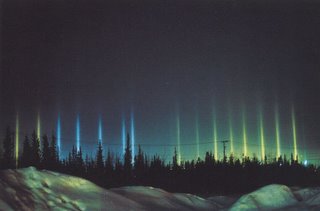 How can an aurora appear so near the ground? Pictured above are not aurora but nearby light pillars, a local phenomenon that can appear as a distant one. In most places on Earth, a lucky viewer can see a Sun-pillar, a column of light appearing to extend up from the Sun caused by flat fluttering ice-crystals reflecting sunlight from the upper atmosphere. Usually these ice ice crystals evaporate before reaching the ground. During freezing temperatures, however, flat fluttering ice crystals may form near the ground in a form of light snow, sometimes known as a crystal fog. These ice crystals may then reflect ground lights in columns not unlike a Sun-pillar. In the above picture, the colorful lights causing the light pillars surround a ice-skating rink in Fairbanks, Alaska.
Posted by Roy at 12:31 AM No comments:
Newer Posts Older Posts Home
Subscribe to: Posts (Atom)