Where the hell is matt?

Tonight, I danced with strangers whom I will never come across again, to the playful banter of a brass band unyielding amongst drops of rain transforming. 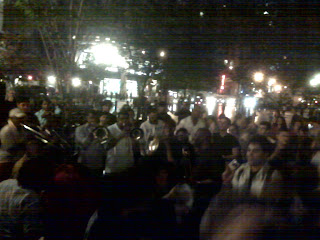 Things are as they should.
Posted by Roy at 10:40 PM
Labels: wonder

Today marks this year's summer solstice, the northern hemisphere's longest day of the year during which we receive the most sunlight and when the sun lingers as long as it possibly could.
I shouldn't overstay my welcome either.

And in the end
We lie awake, and we dream of making our escape

Coldplay - "Death & All His Friends"

It's been exactly three weeks since I arrived. Unsurprisingly, it feels much, much shorter than that. Time really has no sense here, this urban bermuda, teasing us with these silly trains and cars in yellow so that we might think we have what it takes to figure out the system. Factor in the social mindset which states that by being punctual actually meant that you were "almost late," hardly anyone wins. Cat's game.

Anyway, I think it's time that I put some of my musings about the city onto paper before my brain explodes (or forgets, whichever comes first):

Everything you need? I suppose only time will tell. Let's hope it doesn't settle for punctuality.
Posted by Roy at 10:11 PM 1 comment:
Labels: wonder
Newer Posts Older Posts Home
Subscribe to: Posts (Atom)