Hasn't had a bigger economic impact. 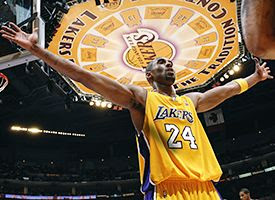 Noah Graham/NBAE via Getty Images
Kobe Bryant did something Michael Jordan never
did -- score 50-plus in four consecutive games.

But he's a better player.

Kobe can do everything Michael did, and even a few things Michael couldn't do.

Kobe is just as good a defender. His killer instinct is just as pronounced. He can shoot, finish and explode. And just like Jordan, the more he's pissed off, the more unstoppable he is.

At the very least, Kobe's scoring spree over the last week should put to rest any lingering doubts that he's the best player in the NBA. Yes, better than Steve Nash, who is the best point guard, but not the lethal force that Kobe is. Yes, better than Dwyane Wade, who is certainly closer to the Kobe-Jordan level than LeBron James, but D-Wade's game is not as polished as Kobe's.

Kobe's streak of four straight 50-points-plus games is something none of those players can do, and it's something that hasn't been done since Wilt Chamberlain, who had an NBA-record seven straight 50-point games. Truthfully, Kobe should have tacked another 50 on Golden State on Sunday night.

Of course, the idea that Kobe is better than Jordan -- or even the best player in this league -- is as repugnant to some folks as a rectal exam. Even though Kobe has proven himself under pressure countless times, he gets the A-Rod treatment.

Kobe can't please anyone. And it doesn't help that most people suffer from revisionist history when it comes to Jordan, forgetting that he was just as poor a teammate and a ball hog and that he ran off coach Doug Collins like Kobe ran off Phil Jackson the first time.

In fact, you could argue that Jordan was even worse. Far as we know, Kobe hasn't jacked up any of his teammates the way Jordan punched out Steve Kerr and Will Perdue at practice.

Kobe will never be forgiven for Shaq's departure, but you're delusional if you think Jordan wouldn't have had any ego issues playing alongside a player with Shaq's star power.

The best-player argument shouldn't be determined by personal dislike. But if you want to take it there, fine. Jordan was hardly the ideal husband, but only the tabloids were brave enough to venture into his personal life. And what about those gambling issues? If Jordan's life had been covered like Kobe's, we would have an entirely different opinion of His Airness.

Besides a different level of media scrutiny, there was definitely a difference in the level of competition during Jordan's heyday compared to now. 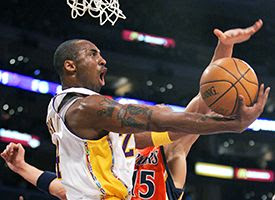 AP Photo/Mark J. Terrill
We ask you to step back and take an objective look. Isn't Kobe the best player in the NBA?

Yesterday's NBA player certainly was more fundamentally sound, but there's no question that today's player is bigger, stronger and faster. When Jordan played, he was a singular force that could not be equaled. Jordan was guarded by the likes of John Starks and Joe Dumars, who were fine players but weren't nearly as skilled or physically imposing as LeBron, D-Wade, Tracy McGrady or even Vince Carter.

The NBA is tougher now.

Kobe, like Michael, is surrounded with mediocre to below-average talent, and Phoenix, Dallas and San Antonio are all better than the Utah, Portland and the Charles Barkley-led Phoenix team that Michael met in the NBA Finals.

Hakeem Olajuwon, David Robinson and Patrick Ewing will be among the best centers ever, but none of them affected the league the way Shaq and Tim Duncan have. There are two two-time MVPs in Kobe's own conference (Duncan, Nash), which is a problem Jordan never faced during his championship runs. Seven-footers weren't launching 3s back then. Magic Johnson and the Lakers were on a downward spiral, and the Pistons were on their last legs. It was Michael and everyone else. That's not the case for Kobe.

The shame of it is that Kobe might finish his career without a MVP, even though his ability can be compared only to that of Jordan and Wilt Chamberlain. All this time we've been looking for a player who is better than Jordan, but most of us can't get beyond whether we like or dislike Kobe as a person to recognize his contributions to the game.

Ultimately the MVP award will go to either Nash or Dirk Nowitzki, who are deserving this season, but neither are as good as Kobe. Dallas and Phoenix are strong enough to make the playoffs without their stars. The Lakers, however, are a lottery team without Kobe.

Jemele Hill, a Page 2 columnist and writer for ESPN The Magazine, can be reached at jemeleespn@gmail.com.
Posted by Roy at 10:01 PM 5 comments:
Labels: see

Thanks y'all. =)
Posted by Roy at 2:54 PM
Newer Posts Older Posts Home
Subscribe to: Posts (Atom)